At the end of April, the European Research Council announced the holders of its grants, among them 45 British scientists. But since the UK is not associated with the Horizon Europe programme, scientists will need to look for ways to relocate to other EU institutions. Grant holders have two months to resolve this issue. Otherwise, they may lose their grants.

An ERC spokesperson: “Yes, this also applies to the new Advanced Grants winners in the UK. To be precise, we didn’t ask these researchers to move, but we pointed out the principle of portability of ERC grants. In the letters, we asked for information about the grant winner’s possible intention to transfer their proposal to an eligible host institution.”

The total amount of ERC grants for 253 senior scientists across the EU is €624 million. UKRI needs to find approximately €110 million to fund 45 of its scientists if they decide not to relocate outside the UK.

The first round of ERC Advanced grants

About €624.6 million is allocated to 253 projects led by experienced European scientists within the Horizon Europe programme. For €2.5 million per project in various fields ranging from mathematics to medicine and linguistics.

Currently, Germany has the most significant number of grants – 61, followed by the Netherlands with 27 and France, whose scientists received 26 grants for their research. This ERC’s first Horizon Europe call is interesting because scientists cannot conduct their research in Switzerland due to a recent decision.

But as in the case of the UK, Swiss scientists can still apply for grants, but they are required to pick a host institution in a Horizon Europe country since researchers of any nationality are eligible for ERC funding. 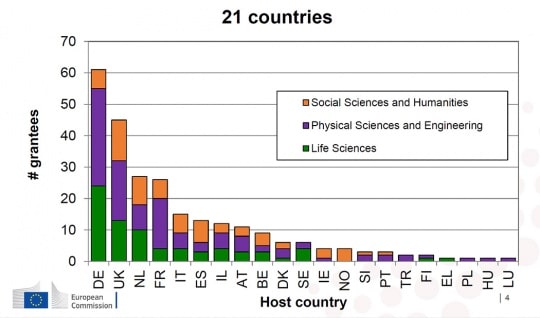