The main goal of Horizon Europe Cities is to achieve climate neutrality by 2030. The European Commission has presented a list of 100 selected cities involved in the project to reduce the negative climate impact within the Horizon Europe Cities Mission. The selected cities are located throughout the European cities. At least one city in the country is represented in the list. The other 12 cities are not part of the EU but are associated with the Horizon Europe research programme.

The Horizon Europe Cities Mission is one of the EU’s five research missions, a new type of programme aiming to generate critical mass to tackle pressing societal challenges. The reports of the European Commission informed that 75% of European citizens currently live in cities that are active consumers of energy and account for more than 70% of carbon dioxide emissions globally. 100 European cities within the Horizon program should become test sites for implementing and testing solutions aimed at reducing carbon footprints and increasing urban mobility.

The programme was launched in 2021 with a total budget of 360 million euros for the first phase of work, including clean mobility, energy efficiency, and green urban planning. In 2023, the allocation process of this money is planned, following the successful completion of the first stage.

The next step for the cities included in this list will be signing the non-binding Climate City Contracts, which will present city plans for achieving climate neutrality in various sectors (energy, transport, construction, etc.). Ordinary residents, together with universities and research organizations, participate in developing plans.

When the contracts are completed, the cities will get an official stamp or ‘mission label,’ signaling their ambition to investors looking to finance green initiatives. The European Commission will announce traditional Horizon Europe calls, funded through the mission budget and open to researchers and cities working on projects to tackle greenhouse gas emissions in urban areas. 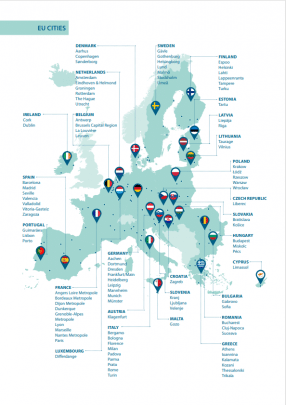