Richer, Visionary, Simpler and Close to the market.  Those seem the be the keywords and lofty rhetoric which is emanating from the newly envisaged Horizon Europe programme promoters and designers that the upcoming new Framework of the European Union for research and innovation which will replace H2020 from 2021 onwards.

The ninth edition of the EU Framework Programme (FP9) will benefit from a significantly higher funding injection compared with its predecessor, (ca. €97.6 billion) which will make it the most highly funded R&D programme ever in the Commissions’ history. Part of this cash injection is a 6% decrease in direct funding for agriculture which has been reallocated to fund Horizon Europe as Common Agriculture payments will now be capped at a maximum of €60,000 Euro per farmer and an increased financial contribution from all member states to the R&D budget.

The EU parliament was expecting €120 billion, lobbyists were pushing for €160 billion and at the end, despite expected Brexit-related headaches and financial shortfalls, this FP will be one of the few MFF headings to be actually increased accompanied in tandem with a doubling of Erasmus+ which is a truly remarkable achievement

The name of the new FP has been wisely chosen by Commissioner Moedas in order to reflect the vision of the new programme, which aims to capture stakeholders’ hopes and expectations, and marking the first step on the road to a more prosperous future for all EU citizens. 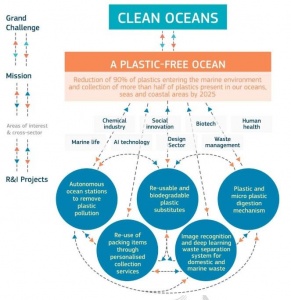 EU citizens’ perception and public knowledge is limited and the benefit and the importance of EU spending in research and innovation is influenced by for example high profile R&D achievements across the water in the USA such as when NASA discovers new planets which were in fact actually uncovered by an EU funded Belgian scientist. Commissioner Moedas realized that a renewed and more efficient communication plan of the EU around its FPs is fundamental to build consensus among citizens and stakeholders.  A “new deal”, based on a type of mission specific approach, for EU research was felt to be required to be readily understandable to the public and capture their imagination and interest.  Ambitions such as plastic-free oceans by 2030 or ensuring the survival of three out of four cancer patients by 2034 is akin to such lofty goals such as former US president John F. Kennedy had back in 1961, when he promised to send a man to the moon and return him safely. Ambitious, aiming high but ultimately achievable and realistic if all the parts of the jigsaw are put together.

It is therefore a not insignificant to turn from the more broader approach to these challenges pose to address them in a more nuanced and specifically targeted and focused objectives.  As the Italian Marina Mazzuccato – Director of University College London’s Institute for Innovation and public influence, and an EC consultant she says; that funding suffered so far by a ‘granularity’ of European research and innovation missions, falling between two stools of broader challenges and concrete projects. Missions which would set clear and ambitious objectives that can only be achieved by a portfolio of research and innovation projects and supportive measures.

First Pillar:  Open Science (replacing H2020 “Excellent Science”). It supports researchers through fellowships and exchanges as well as funding projects defined and driven by researchers themselves, through the European Research Council and Marie Curie actions.

Second Pillar: Global Challenges (“Societal” evolution and Industrial leadership). It directly  supports  research  relating  to  societal  challenges,  setting  EU-wide  missions  with  ambitious goals around issues that pertinent to all EU citizens such as cancer,  cleaner transport solutions’ and mobility  as well as such topics as plastic-free oceans.  The industrial leadership focus is prominent within this pillar and throughout the programme as a whole.

Third Pillar: Open Innovation: This is the EU’s research entry point to the market. This pillar aims to make Europe a front-runner in market-creating innovation activities.  It will host the activities of the European Innovation Council  (meanwhile phasing-in from its pilot phase) which will  offer  a  one-stop  shop  for  high  potential  and breakthrough  technologies  and  innovative  companies  with  high potential for scaling up.

Horizon Europe all in all aims to see and reach above the horizon to ensure that practical and pragmatic research and innovation outcomes emerge from this new Framework programme in the form higher quality outcomes of intellectual property rights, patents, new products and services that reaches every corner of the EU and every EU citizen.